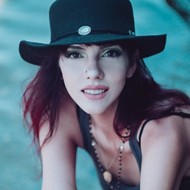 This transformational nature of desire is at the very heart of Taurus. As the ruler of the 2nd House, it represents those things we literally desire — possessions, money, jobs, houses, material objects. After establishing the ego and perception of identity, Taurus represents the point at which we identify with desire, emphasizing the physical experience. In the acid-washed psychedelia of the zodiac-crazed 70s, Taurus is the lusty-eyed bull surrounded by intoxicating flowers, an indulgence of the senses and celebration of bodily pleasure but this is an oversimplification.
If we look back into Taurus’ mythological origins, there’s an immediate conflict: there are several potential heavenly bulls, none of whom clearly represent the depth and nuance of the sign. One of these is Io, a maiden priestess of Hera. Io’s story certainly has a certain Taurean flare — sensual, psychedelic dreams drive Io into the arms of a mysterious lover, forsaking her spiritual vows to sate her physical hunger — and in the end, Io is transformed into a white heifer to escape the vengeful wife of her lover, her once-holy mistress Hera. But there’s no mention of Io being installed in the stars.
Most point to the myth of Europa, the shepherd-princess of Tyre seduced by a white bull. Her curiosity was piqued as she noticed the stranger amongst her father’s flock and transfixed by his milky-white hide, Europa climbed atop the beast only to be spirited away to Crete, where the bull revealed himself as Zeus, King of the Gods and collector of beauties. Their union bore three children, one of whom would later be hailed as the founder of European civilization. Whether he knew the Minoans would advance arts and commerce, create the first European coinage, or simply wanted to commemorate the conquest, astrologers suggest Taurus is Zeus’ former skin hung amongst the stars.

Margaret Brundage, 1936
But both these myths leave much to be desired. We see no evidence of Taurus’ planetary ruler anywhere — Venus is wholly absent and Jupiter becomes the star of the show. Additionally, we’re left without explanation of a very important feature of the constellation itself: Taurus is missing its legs.
In the Age of Taurus, Guanna, or Gugulanna, appeared on the horizon at the Spring Solstice. Guanna ushered in a temperamental season beginning with cold winds that gave way to intense storms. During that time there ruled a king of such splendor and strength that we still tell our children of his acts several thousands of years later. It’s hardly surprising that he caught the eye of Ishtar, Princess of Heaven and Divine Light of Love and War. She sang to him a Song of Songs, promising wealth and fame and wondrous objects — a chariot of lapis, horns of amber, a fragrant palace full of adoring subjects. Ishtar was the Queen of Desire and knew the art of tension well, but the King of Uruk, her intended, was unlike any she had seduced before. Instead of yielding to her advances and reaping the rewards of her favour, he asked her what was to come. King Gilgamesh was skilled in war and rich in love and devotion; he knew desire was the tension, not the target, and when the bowstring was released the arrow would fall. Instead of answering Ishtar’s proposal, he reminded her of her previous husbands and the way her love for them waned. He told her of the men and beasts she had shined her light upon only to see them cruelly delivered to exhaustion and ruin. Her love, he declared, was fleeting and he would not sacrifice himself to her.
But hatred is just another face of desire and with her love turned to rage Ishtar returned to heaven to demand Gilgamesh answer for his insults. There would be no pleasure for the king or his people: Ishtar would release Guanna, the Bull of Heaven, upon Uruk. Her father begged her to reconsider — had she not provoked the king to begin with? Perhaps she brought this insult upon herself. The Bull of Heaven was a fearsome beast with the power to ruin entire nations; to release him would mean years of famine and destruction from which the kingdom might never recover. But Ishtar insisted: “If you do not give me Guanna,” she declared, “I will knock down the Gates of Hell, I will trample the door and let the dead go up to devour the living.” Ishtar’s lust would be sated, if not by love than by war. She led Guanna by the nose down to Uruk and released him by the banks of the Euphrates.
With one snort, the earth cracked. The heat of his breath opened fissures. But as we know, Gilgamesh was rich in love and his devoted friend Enkidu charged in to defend him. With his own beastly strength, he stilled the Bull’s wild bucking and held Guanna’s massive horns. Gilgamesh drew his sword and thrust it into Guanna’s neck. The Bull of Heaven was dead.
Once again dissatisfied, Ishtar wailed in the streets. She gathered her temple maids to mourn Guanna, leading them through the streets in a pageant of unfulfilled desire. But as she drew near Gilgamesh, now the object of her ire, Enkidu ripped the flanks off the Bull and flung them at the passing goddess. It was a silent message: your will is impotent, your desire is empty; you will not get satisfaction.

Lawrence, 1949
Ishtar’s desire was not fulfilled, but the tension continued to build. She wanted Gilgamesh as her own, the legendary king turned passionate devotee of her divine pleasures. Taurus is a sign of physical experience, of life within the sensual world, but as Ishtar was about to find out Guanna was more than primal instinct and force.
As the people of Uruk turned Guanna into an object of worship, marvelling over his horns of lapis and crafting sacred oils from his rendered hide, the gods looked down aghast. Guanna was not simply a beast to be slain, he was a tool of divine will — the destruction he wrought was decreed by the gods themselves, and yet it had been overthrown by a single act of mortal impulse. Guanna’s slaughter was an act of grave disrespect and Gilgamesh would need to pay for this crime. In order to rebalance the scales of value, he would need to repay life for life: Gilgamesh repaid his godly debt through the death of his loyal friend Enkidu, an unbearable loss for both men. In the end, Gilgamesh had his horns of lapis and his cedar palace, but he did not have that which he valued most: friendship.
This is the ultimate lesson of the 2nd House: it’s the journey of physical experience, the assignment of value and priority, the space we fill with collected objects and roles. Taurus represents the hierarchies of needs and desires that we work our way through in this human lifetime in search of that for which we would give up our lives, the journey to purpose. Desire is tension but value is the target — without a clear view of these values, we cannot hope to hit our mark. An arrow without aim becomes disappointment or destruction. Find your value and aim well.

Hey everyone! Just a quick note that you can listen to the Hex & Heal Podcast now through Anchor and Spotify, and we're working to get it up on all your favourite podcasting platforms soon!

AND the long-awaited second episode will be up next week